You are here: Home / Archives for Ravel 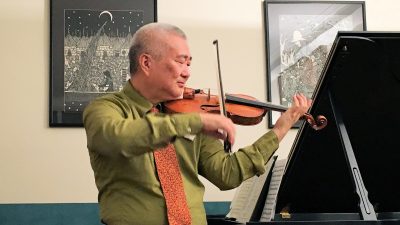 Chin Kim is an international violinist who has studied with, among others, Joseph Gingold, the last student of the legendary violinist Eugène Ysaÿe. END_OF_DOCUMENT_TOKEN_TO_BE_REPLACED 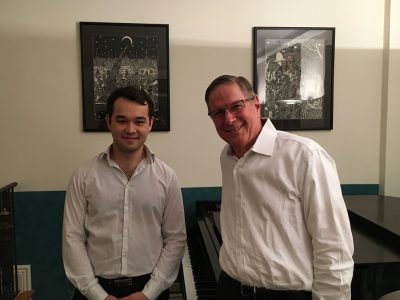 This accomplished young Julliard graduate has an impressive CV, and the program for the evening looked enticing.

Liszt’s weighty suite consists of a series of piano pieces imbued with literary and historical associations. There is self-conscious grandeur in some of these episodes that challenges the pianist with its key-pounding lack of subtlety.

Poizat immersed himself in Liszt’s theatricality, shaking the floor when stamping the sostenuto, attacking Liszt’s parallel octaves with vigor. At more reflective moments he would stare beyond the keyboard, or drop his forehead towards the keybed. This was a strong and heartfelt presentation.

Mompou’s variations are based on Chopin’s one-minute long Prelude in A major Op. 28, No. 7. It was elegantly played by Mr. Poizat, but I could not help but wonder why a composer would tinker with such a Chopin gem. 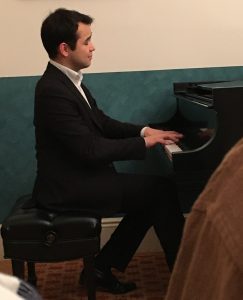 Poizat introduced Ravel’s La Valse to us as a post-war (World War 1) ‘swan song” to the great Viennese waltz. The composer himself, however, described the work more as a waltz gradually revealed, than as a declining tradition or the symbolic end of the Austro-Hungarian Empire.

Poizat’s virtuoso Ravel contained little sense of decline or loss. He uplifted us with waves of criss-crossing glissandos and stunned us with left fist blows to the bottom end of the keyboard. While he had my head spinning like a dancer in the swirling waltz, he stayed focused on the flow of Ravel’s masterpiece and earned a rousing ovation.

After Ravel, Poizat surprised us by returning to the keyboard for an encore.  Since we clearly loved waltzes, he would play another one! I expected a light dessert such as a Chopin waltz, but this was not a Chopin sort of night.

Instead, he served up Shostakovich’s lugubrious Waltz No. 2 in a stunning, unpublished arrangement. This very satisfying conclusion resulted in your reviewer purchasing Poizat’s CD containing both waltzes (http://www.fxpoizat.com/#discography).