Chin Kim is an international violinist who has studied with, among others, Joseph Gingold, the last student of the legendary violinist Eugène Ysaÿe.

For this concert, Chin Kim partnered with collaborative pianist Younji Lee, who is pursuing her doctorate in Piano Performance.

The Tartini/Kreisler Violin Sonata in G Minor (“Devil’s Trill”) is a magnificent work with a devilish cadenza by Fritz Kreisler.

Chin Kim engaged this challenging work with compelling vigor and ever-increasing clarity as his Vuillaume violin warmed to the task.

After the virtuoso cadenza, the piano returned to set up the closing cadence. When it was over, there was a moment of awed silence before the applause.

Members of the audience who enjoyed this work will probably love the benchmark 1962 Prague performance by Ida Haendel.

Chin Kim explained that Prokofiev’s Sonata was intended for students. This explains why the work is more of an étude and nothing like the characteristically dissonant Prokofiev known to concert-goers.

In Chin Kim’s competent hands the Sonata was clean and pleasant, although musically it was not the kind of work your reviewer is drawn to.

Franck: Sonata for Violin and Piano in A Major

If the Devils’ Trill was a warm-up and Prokofiev a little chilly, Cesar Franck was another story. This enchanting French work is popular for good reason, and gave Chin Kim and Younji Lee the opportunity to show their best. 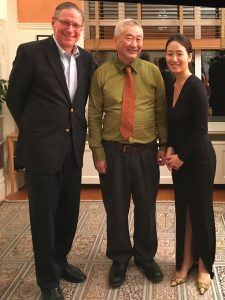 The piano part is demanding and at times takes the foreground. Younji Lee provided a solid and sensitive foundation upon which the violin could soar, and led the violin with aplomb in the closing reprise.

Opening with a violin solo of around four minutes, Tzigane breaks into sparkling, ethereal piano swirls that Younji Lee spun magically for us. Later we heard a frenzied dance with pizzicato and harmonics from the violin, beautifully executed by Chin Kim and at times on par with such as Midori.

There was a story behind the inclusion of this work in the program. However it shall remain with those attending the recital. Suffice it to say that this sweet little work lasted barely 3 minutes, and made our evening complete.