You are here: Home / Archives for salon concert 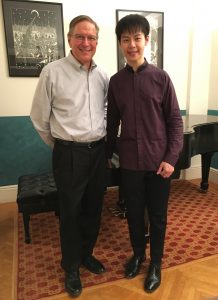 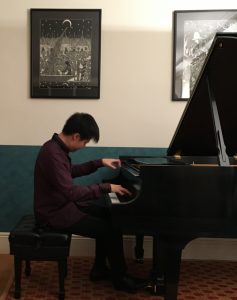 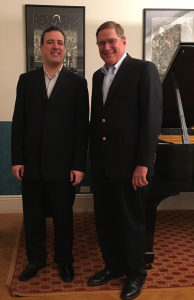 I first saw Michael Bulychev-Okser while I was meeting other guests in the foyer of Mr. Shoemaker’s home at Central Park West. While many pianists seclude themselves backstage prior to performing, our pianist for this December evening stood nearby, friendly and engaged.

This was a good sign. At Mr. Shoemaker’s salon concerts there is no stage to elevate the pianist, and no stage lighting to isolate the performer. The pianist and the audience inhabit the same space, and Bulychev-Okser appeared ready to make the most of this.

Bulychev-Okser is an enterprising and accomplished pianist and composer who began his studies in Russia and now lives in the United States. You can find his extensive bio on the web site of the Gershwin International Music Competition, which he founded and directs. He also founded the Alion Baltic International Music Festival.

Mr. Bulychev-Okser’s low-key style made it easy for him to connect with his audience, despite his imposing résumé. He introduced each work to us, sometimes with humorous anecdotes, before playing it. At the keyboard, he did not indulge in theatrical gestures or other artifice to tell his audience how to feel: he just played his heart out for us.

The program was heavily weighted toward piano arrangements. Here is the detail, with links to representative YouTube videos.

The repertoire was substantially Russian, from Balakirev/Glinka thru Arensky, Alabyev and Rachmaninov. And Bulychev-Okser himself came across as a seriously Russian pianist. No surprise there, given his Moscow Conservatory roots.

But if Bulychev-Oksner had not spoken to us in his melodic Russian accent, would his performance have felt so Russian? Was I deluding myself into perceiving the authenticity of Glinka/Balakirev’s plaintive Lark, Rachmaninov’s soulfulness, or the balalaika-like dance that breaks out around 2 minutes into The Nightingale? I don’t think so!

I’m used to softer versions of The Nightingale, but I loved how Bulychev-Okser threw himself into this piece. He made the floor shake and our ears ring. You don’t often see a world-class pianist stomping the sustain pedal as if he were wearing Cossack boots. In a less intimate performance space, everyone would have cheered.

It was harder for me to relate to the concluding elements of the program, including Bulychev-Okser’s own composition, because I don’t understand jazz. However I enjoy Gershwin, and looked forward to the Rhapsody in Blue Potpourri. Unfortunately the original work (here) outshines any substitute. So I was a little underwhelmed, through no fault of the pianist.

An Evening of Contrasts

The piano sang when Bulychev-Okser played Russian repertoire. When his program shifted from Russian to American it was more in keeping with his adopted country’s culture, but less compelling. While America is also my adopted country, I personally preferred Bulychev-Okser’s Russian material. Finally, I don’t think that anyone who attended will forget his floor-shaking Nightingale.

On Saturday 19th November, 2016, my daughter and I were privileged to see pianist Soo Yeon Cho at a private salon recital hosted by Robin Shoemaker in his home on Central Park West, New York.

I had never been to a salon concert, so I was unsure what to expect. But our host welcomed us at his door and quickly put us at ease. With a glass of wine in hand, we enjoyed having time to connect with other guests.

The guests ranged from musicians to scientists, New Yorkers to Hungarians, and from as far away as Australia. It was inspiring to be among such a diverse audience, brought together by love of the piano. I am only sorry that there was not enough time to get to know everyone.

The Salon Concert was a different kind of experience from public recitals. I have had some great seats at Carnegie, but there is always a gulf, physical and emotional, between audience and performer. In Mr. Shoemaker’s salon we breathed the same air as the pianist, and there were no spotlights to differentiate her space from our space. 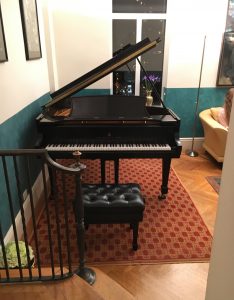 The recital was held in a room containing a Steinway and improvised seating for about 20. The walls were adorned with black-framed art that created a serene ambience.

During the intermission I was surprised to discover that more people had been seated in the corridor looking into the salon, and I was touched to see that our host had left the best salon seating for his guests.

Ms. Cho is my piano tutor, so I was already aware of her skill and her prodigious resume. She has two degrees from Julliard, and many performance and competition successes. But being tutored by an accomplished pianist is very different from attending a professional recital by that pianist, and on this evening I finally got to understand just how good Ms. Cho was.

Our host provided a printed program for the event. The selection was well-architected, from the opening baroque thru romantics Chopin and Schubert, with a spike to Ginastera, and thence to the father of modern piano, Franz Liszt. Here is the detail, with links to other performances for readers unfamiliar with any items listed. The first link is to a prior performance by Ms. Cho herself.

I have always thought of Domenic Scarlatti as one of “those” baroque composers that one has to whet one’s pianistic skills on out of duty more than preference. But Ms. Cho showed a special affinity for this composer and her performance brought him to life for me. Her G Major sonatas were vibrant, from the ringing K427 to the mania of K455. Her D Minor K213 sonata was haunted and moving, impressive for a composition that was born on the harpsichord.

I had been looking forward to Chopin’s C sharp Minor Nocturne (op. post.) as the highlight of the recital. It is one of my personal favorites, and as expected, Ms. Cho played it with consummate artistry. 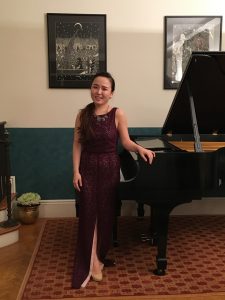 Ms. Cho after the recital

The Ginastera was an abrupt contrast to preceding selections. Ms. Cho tackled its challenging syncopation and rousing percussiveness with vigor. Then Schubert’s serene G Major Sonata returned us to the opening key of the evening, and to more traditional harmonies.

The recital ended with Liszt’s showpiece arrangement of Gounod’s Faust waltz (see this Vienna Philharmonic performance for the original). Here Ms. Cho showed impressive power at the keyboard, delivering an encore-like finale that brought closure to a great  evening.

I don’t know how Mr. Shoemaker came to invite Soo Yeon Cho for his salon concert, but he chose well. As for Ms. Cho, I can’t imagine how much work she must have put into preparing for this recital. But it all worked so well that although we found ourselves in a hailstorm as we left the Shoemaker residence, we were so warm inside that it just didn’t matter.