You are here: Home / Archives for carnegie debut 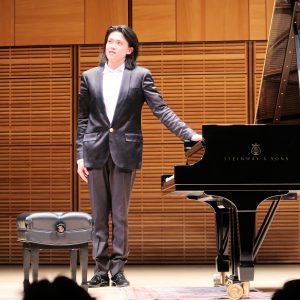 A tall man with shoulder-length hair, Cong Bi stood with his hand over his heart for a few moments, prompting shrieks from the audience.

The last male pianist whom I saw have this effect at Carnegie was Korean superstar Seon Jin Cho.

This work was a bold opening gambit for Cong Bi’s Carnegie debut. He engaged the allegro assai with the conviction that we expect from a seasoned performer. However his arpeggios seemed rushed. That which should have glittered was too often blurry.

If Cong Bi overreached during the first movement, he made amends with his authentic andante con moto. This reviewer appreciated the left hand voicing in particular.

Cong Bi’s rendition of this work was generally balanced and sweet, occasionally flamboyant. Since the works of Schumann mostly leave this reviewer unmoved, it would not be fair to the performer to comment further.

Cong Bi’s Pictures started cautiously and swelled into magnificence. This work can so easily become ponderous, but Cong Bi is not that kind of pianist. I appreciated his engaged, powerful delivery and excellent sense of timing.

However, we could have done without Cong Bi’s abrupt “pointing backwards” arm gestures! These attempts at pianistic drama did not work because they felt inauthentic. For this reviewer, only Lang Lang can get away with such gratuitous posturing. 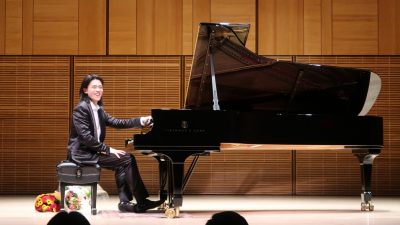 The first encore was a pleasant Bach work that nobody I spoke to could identify.

I’ve commented before on how pianists’ encore choices can be revealing. At the end of the day, Cong Bi did not go for a showpiece. Instead, he went for the sublime.

After the closing bars of Bach, the pianist played a very short jazzy riff. I took this as a youthful gesture of victory: “I got this”!  But maybe it was just for the young women who gave him flowers.

Cong Bi is an impressively self-assured and promising young pianist, at ease on stage and able to joust with his audience. In his Carnegie debut he showed himself to be equally at home with Beethoven’s raging Appassionata, Mussorgsky’s monumental Pictures, and Bach at his most ethereal. Watching him reminded me of the Washington Post article The Future of Classical Music is Chinese.

Cong Bi got better and better as the evening went on, but after the intermission I noticed a few empty seats. If only these people had stayed, they would have been rewarded with a stirring performance of Mussorgsky and some magical Bach. And of course, that cheeky riff!

My personal thanks to producer Qianci Liu for inviting me to this most enjoyable recital, and to the Paulus Hook Music Foundation for making it possible.