On Saturday December 10th, 2016, my wife Patti and I went into New York early to stop in at Europa Cafe (205 W 57th St., recommended) before Khatia Buniatishvili’s recital at Carnegie Zankel.

The repertoire for this recital was distinguished by its grandeur and virtuosity, consisting only of Mussorgsky and Liszt. It was a program of sheer audience indulgence, performed by the strikingly beautiful pianist from the Republic of Georgia.

Khatia Buniatishvili is one of the finest younger pianists that I have discovered through YouTube. Her Vernier rendition of Chopin’s E minor Prelude (Op.28 No. 4), a slow cataclysm wrapped in angel cake, is a standout performance that made her a must-see when it came time to choose a Carnegie subscription for 2016.

For Carnegie, Khatia wore a charcoal evening gown and matte black heels. She walked with grace and had a warm, embracing smile. Her stately carriage continued when she sat. I don’t think I have seen a performer with a straighter back at the piano than Ms. Buniatishvili. It felt to me like we were in the presence of musical royalty.

Mussorgsky’s Pictures at an Exhibition

From the opening, the pianist used just the right amount of rubato to keep alive phrases that can easily become leaden. Her extensive use of una corda and rapid half-pedal on the sustain (wonderful what you can learn when you are up close) made the more reflective segments glow like the black Steinway did under the Zankel stage lighting.

On the stronger sections the pianist did everything well, but the Carnegie Steinway seemed brassy at the lower end. This had me wondering if we would have been better off with the rounder bass of a Yamaha. But perhaps it was just the acoustics.

There were four Liszt items on the program, and with each one Ms. Buniatishvili got closer to perfection. I will discuss only the last two: La Campanella and the Hungarian Rhapsody No. 2.

Khatia’s La Campanella was a treat. That said, the top notes seemed too loud compared with the rest of the right hand, which is not the case in her recordings. But I was just 12 feet from the right side of the keyboard, which may have contributed to this.

Liszt’s Hungarian Rhapsody No. 2 was, for both my wife and myself, the peak of the evening. It is an exciting virtuoso piece, and was carried off with such vigor and natural feel that it was a perfect conclusion to the program. Here is a link to Khatia’s 2015 Verbier performance, but I thought that her 2016 Carnegie Zankel performance was even better.

If Ms. Buniatishvili’s entrance to Zankel Hall was stately, her departure was also gracious. She preferred a simple pianist bow, sometimes with left hand on the piano, and she made a point of looking to all the audience, including upstairs and to each side. She also made direct eye contact with me in the front row, which just about blew me out of my chair.

No review of Ms. Buniatishvili would be complete without mentioning her hair. Whenever Khatia plays you will see those ragged curls fall over her eyes. Since her eyes are more often than not closed, this has no effect on her performance. We see that the performer is lost in her art, and we love her all the more for that.

What was that encore?

Khatia’s encore was delightful and familiar but other than recognizing it as Bach, I could not name it. Waiting in line after the concert to meet the artist, I conferred with my neighbors but none of us were sure. I later learned that we know it as “Sheep may safely graze”, from Bach’s Cantata BWV 208. Listen to it in the following video from an earlier Paris performance, where she appears to be wearing the same dress that she wore for Carnegie.

My piano is your piano 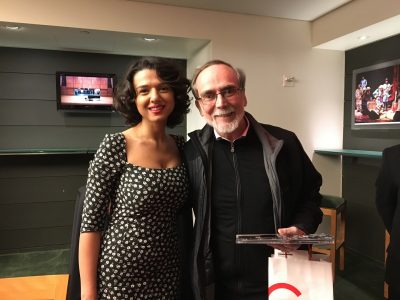 Khatia Buniatishvili and the Author at Carnegie

Whenever I go to Carnegie I hope to meet the performer, but this is the first time I succeeded. Newly purchased CD’s in hand to be autographed, I had no coherent way to express what I was feeling! But I am sure that Ms. Buniatishvili is used to goofy grins from people who find themselves in the presence of unique talent and are just happy to be there.

My piano is your piano, Khatia.