You are here: Home / Archives for Yannick Nézet-Séguin 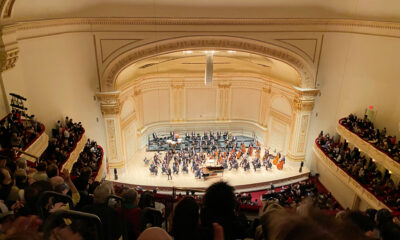 On February 24th, 2022, we saw the most remarkable Vienna Philharmonic Orchestra concert at Carnegie Hall. It was an all-Rachmaninoff program whose conductor and pianist were cancelled the day before the concert, due to current world events.

In their place, pianist Seong-Jin Cho flew in from Germany and Yannick Nézet-Séguin of the Metropolitan Opera stepped in as conductor.

Seon-Jin Cho is an energetic young performer who had a daunting task at Carnegie. In Central European Time (CET), he started to play at 2:25 a.m.

From my balcony seat, the keyboard was visible from end to end like an airport runway from an incoming flight. Seong-Jin Cho’s hands were too distant to see clearly. Would he play the opening 10-key-wide left hand chords as written, or would he use a small-hand workaround? Some pianists will play the bottom note like a soft grace note; others will roll (arpeggiate) those chords. But Mr. Cho’s opening sounded as the composer intended.

Thereafter, Mr. Cho bounced and kicked his way through the concerto with spiky verve. While the piano often blended into the orchestra, Mr. Cho punched the low end through and dazzled us with high-end keyboard pyrotechnics. His brief Schubert encore was invisible by comparison.

I own a precious 1994 recording of this symphony by Yuri Temirkanov and the St. Petersburg Symphony. It is my baseline for this work. And Yannick Nézet-Séguin’s conducting was theatrically expressive, adding a whole extra dimension to the performance.

The conductor’s interpretation was well-paced and devoid of the tempo rushes I’ve heard elsewhere. This is a sweeping, soaring symphony with progressively larger climaxes salted with strong brass. And yet, something was missing in the brass: it lacked the languishing vibrato I prefer.

Some of our top pianists have stepped on to the world stage by standing in for others, but Seong-Jin Cho is already on that stage. He didn’t have to take on this challenge, but the audience at Carnegie was grateful that he did.

This was the first time I had seen the Vienna Philharmonic. Their performance was so clean that it would have been easy to take them for granted and give all the credit to Rachmaninoff. Their first violin’s solo fragments in Rachmaninoff’s 2nd symphony were particularly sweet..

As Mr. Nézet-Séguin said afterwards, if anyone wants an encore, the Vienna Philharmonic would be playing at Carnegie for the next two evenings.