You are here: Home / Archives for Ligeti 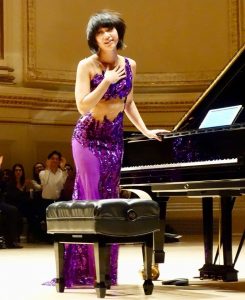 Yuja Wang opened her May 17th 2018 Carnegie recital with Rachmaninov’s Prelude in G Minor Op. 23 No. 5. Starting as a rousing march, this prelude erupts and transforms into an exotic fantasy. The march returns only to recede unexpectedly, as if everyone ran away.

In Yuja’s hands the opening tempo wavered, perhaps in anticipation of Rachmaninov’s cinematic legato or his final, self-deprecating wink. Her interpretation blended the contrasting sections well.

As with Ms. Wang’s 2016 Carnegie recital (reviewed here), the most enjoyable repertoire was at the beginning. I could feel Ms. Wang’s involvement with Rachmaninov, and wished for myself that she had not changed her program to include fewer preludes.

This particular work does not do a lot for this reviewer, so I will not comment on it.

Before the Ligeti, someone came out to the Carnegie Steinway. At first we thought the piano had a glitch, but actually the gentleman positioned an iPad inside the piano so that Ms. Wang could sight-read. I can understand why memorizing these etudes could be a challenge, but Yuja was totally on top of this work and gave us an enchanting, virtuoso performance.

Prokofiev Sonata No. 8 in B flat major

The Carnegie program described Prokofiev’s Sonata as exhuding a sense of “peace, optimism and resilience”. While the opening has a certain serenity, my overall impression was of occasional major-key sunshine clouded by Prokofiev’s peculiar harmonies and manic rhythms. This was a demanding piece for performer and listener, but Yuja gave an epic rendition.

In 2016, Yuja Wang played five encores at Carnegie. In 2018, she played seven. While the 2016 encores appeared to be chosen on the spur of the moment, the 2018 encores seemed more deliberate. Yuja traipsed off and on stage between each encore with minimal time spent acknowledging the audience, as if on a mission to cram in as much material as possible.

Fans like myself have heard various of Yuja’s Rondo Alla Turca and Carmen encores many times. This time she seemed a little ragged, but it was still immensely enjoyable, especially when she accelerated Mozart to a ridiculous speed.

Ms. Wang likes to close her encores with something reflective, and this time we got Schubert’s Gretchen am Spinnrade arr. Liszt. She sang silently while playing this. For me this was the peak of our evening with Yuja. 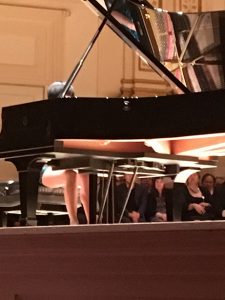 Yuja Wang came on stage in a breathtaking purple dress with skin-toned midriff. This drew wild cheers from the Carnegie audience. We expect such elegance from our cultural icons, of course.

Post-intermission Ms. Wang likes to wear something more revealing. I wonder if she realizes how hard it can be be hard to listen to her play when your view of the pianist is limited to whatever is showing under the piano.

Has Yuja Wang Grown Up?

There was more musical bite to Yuja’s 2018 program, but less spontaneity in the encores. The speed with which she raced through the encores, and the short steps she took due to high heels and tight clothing, made her look like a clockwork doll. Perhaps it was just the cumulative effect of months of touring, but to this reviewer it felt like Ms. Wang was drifting away from her audience. Has Yuja Wang grown up? Let’s hope not!