You are here: Home / Archives for Kevin Bate 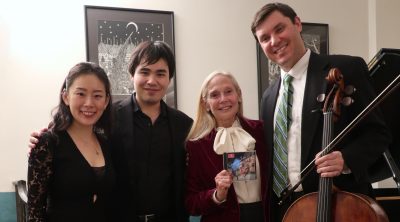 The program consisted of various items by Gabriel Fauré including 3 of Gloriosa Trio’s own arrangements. It also included a work by New York composer Karen LeFrak, who was present at the concert. 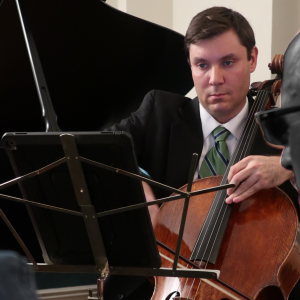 This piece was originally written for piano and cello. It was later orchestrated by the composer and became part of his Pelléas et Mélisande suite. Various other arrangements exist, including one by Gloriosa Trio.

The Trio played their own cello-forward arrangement. Piano and violin weaved a poignant atmosphere around Kevin Bate’s strong but tender cello. In this arrangement the violin picked up some phrases that the piano carries in the original, adding a touch more color and sweetness. 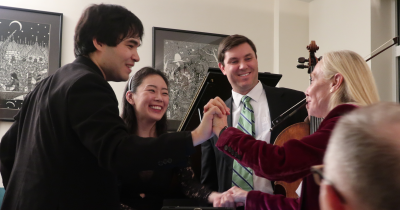 When musicians play your work: Karen LeFrak with Gloriosa Trio

Karen LeFrak’s Gloriosa premiered in 2015. It shares some of the wistful atmosphere of Fauré’s century-old music, making for a good program fit.

The work itself was evocative and at times playful, worthy of further listening.

The composer and musicians embraced after playing her composition.

Fauré’s Pavane seemed tailor-made for Gloriosa Trio. It is sad but not tragic. It is also exquisitely French, beautiful to the edge of sentimentality.

At first the pizzicato-like piano accompaniment felt a little strong. But I came to realize that those staccato arpeggios were the heartbeat of this delightful oeuvre. They bring tension and motion to this otherwise soft and gentle work.

This is a short and beautiful song, arranged by Gloriosa Trio for their instruments. For comparison, here is a link to the vocal version as sung by New Zealand fully lyric soprano Kiri Te Kanawa.

The Piano Trio was the only Fauré composition of the evening that the Gloriosa Trio had not themselves arranged. It is a late work, completed in 1923.

Compared with the music played earlier, the Piano Trio was relatively ascetic. This reviewer found it to be pleasant but a little diffuse. It is evidently a composition that requires repeat listening.

Gloriosa Trio is an excellent piano trio, despite their relatively infrequent collaborations. Their concert at the Shoemaker Salon was delectable, and Fauré’s music seemed tailor-made for them. Their arrangements were clean and true to the original, to the point that they could have been written by composer himself.

We have seen pianist Yoonie Han at the Shoemaker salon before, see this review. 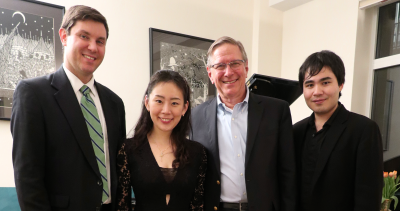