You are here: Home / Archives for Hilary Hahn 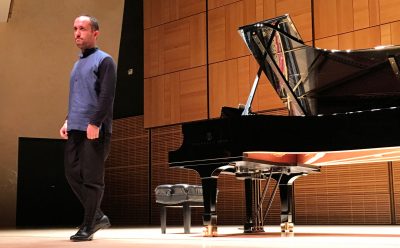 Igor Levit’s 2017 Carnegie recital was described by one reviewer as “a peak pianistic experience of my concertgoing life”.

I signed up for Levit’s 2018 Carnegie recital hoping for just such an experience.

However for me the repertoire of the October 19th recital alone was sufficient reason to subscribe.

And so, after gorgeing ourselves at the Brooklyn Diner on West 57th Street, my dear wife and I entered Carnegie Zankel stuffed with great food and full of expectations.

I have attended strong two-handed performances of Bach’s D Minor Chaconne (arr. Busoni) by Han Chen and Virna Kljakovic. However Igor Levit was my first live experience of Brahms’ left hand arrangement. I had great hopes for it, because the underlying Partita is superlative.

Bach Partita #2’s Chaconne soars to spiritual heights and sinks to the edge of despair (over the death of Bach’s wife, some say).

But when compared with the edgy clarity of Hilary Hahn’s violin or the harmonic density of Busoni’s two-handed arrangement, Levit’s Chaconne felt as cold as the stone of a cathedral. Somewhere between Brahms and this pianist, the flame went out.

From my front row right seat, I had a great view of Levit’s sostenuto. I was able to see how he worked the pedals to create ethereal tones in higher registers. He used much partial pedal to thread the hazardous path between too little resonance and too much.

I could literally see the resulting harmonics hanging in the air. They looked like a church organ, with harp-like strings in place of pipes.

Mr. Levit’s performance of this work was the high point of his recital, and utterly mesmerizing. You can hear him play this for yourself at Igor Levit plays Busoni Fantasia nach J.S. Bach – live 2015.

Schumann: Variations in E-flat Major on an Original Theme

This serene but unremarkable work left your reviewer unmoved. This was not through any fault of Mr. Levit. Schumann never has done much for me. Perhaps you, dear reader, will get more out of Igor Levit’s Variations in E-Flat Major on an Original Theme “Ghost Variations”, WoO 24 than I did.

The Solemn March opens with a descending bass motif that sounds like huge bells tolling over a stately procession. The bells continue throughout the work, giving it a gravitas that fitted the rest of the recital program. Although there are more dramatic performances, I personally appreciated Mr. Levit’s understated interpretation.

Liszt is the kind of composer you either love or you hate. My wife and I are at opposite ends of this spectrum, but I have to agree that this brash, showy work does not inspire me the way even the Parsifal arrangement did.

In my opinion Mr. Levit could profitably have dropped this work from his program, buying him time for a couple of encores that would have greatly endeared him to his neglected Carnegie audience.

Frederic Rzewski “A Mensch” from Dreams, Part I [encore]

Mr. Levit announced that he would play only one encore. Disappointing as this was, it is hard to imagine following a program of such gravity with any kind of casual crowd-pleaser.

Indeed, A Mensch was no crowd-pleaser. Your unfortunate reviewer neither liked nor understood this awkward, atonal work. For future performances, it would help if Mr. Levit would grace his audience with a brief musical introduction.

What was the point of the pianist rapping the piano with his fingers, or the closing moment when he slid his foot off the damper pedal so that it sprang up with a loud CLACK?

Igor Levit: one of a kind

When Mr. Levit was ready to start Busoni’s Fantasia, a latecomer was being seated. Whatever he may have felt, Levit flashed a good-natured smirk at the audience. It was a reassuring moment, and one of many indications that although Igor Levit is a different kind of pianist, he is still human.

There were cases where Mr. Levit’s individuality was less impressive. At the end of Busoni’s Fantasia, and again at the end of Liszt/Wagner’s Solemn March to the Holy Grail, the audience waited politely for the pianist to sit up and indicate that he was finished. Instead, Levit started the next part of his recital. These were awkward moments, verging on rude.

There were other moments that I could cite to illustrate Mr. Levit’s uniqueness, but I will trade them all for the answer to one question. When you were sight-reading from your iPad, Mr. Levit, I did not see a page-turner pedal. So how did you turn the page?