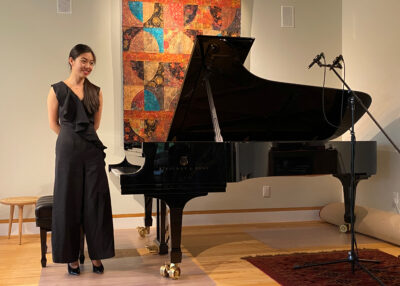 Some pianists (Roving Pianist included) prefer to isolate prior to performing. But Ms. Tang’s innate confidence allowed her to mingle with ease, describing her program and fielding questions from us during the pre-concert discussion.

Thus, when she took her seat at the 9-foot Steinway concert grand, the audience had already warmed to her.

Domenico Scarlatti’s K.445 Keyboard Sonata in F major is, well, very Scarlatti. Of the 500+ sonatas that he wrote, it is fairly typical. Rippling, twirling runs leap between the pianist’s hands, framed by recurring left-hand punctuation.

This piano was well-suited to Scarlatti. The low end was clean, reminiscent perhaps of Beethoven’s time, although more powerful. And Stephanie used the lightest pedal, ensuring that the brightness of the instrument did not blur her nimble fingerwork.

Ms. Tang described this early Beethoven work as humorous and cheeky. And throughout her performance, her appropriately theatrical facial expressions were priceless.

We are not accustomed to thinking of Beethoven as entertainment, but under Ms. Tang’s hands this overtly mundane Sonata was in fact a lot of fun.

To judge by her expression afterwards, she enjoyed it at least as much as her audience did. 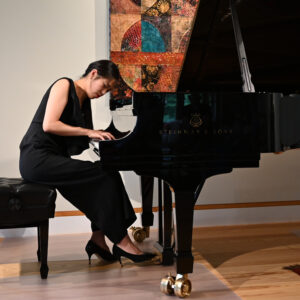 Stephanie guided the audience through Scarlatti and Beethoven, but everything changed when she transitioned to Chopin. The artist was a different pianist for Chopin, becoming the medium instead of the message.

Chopin spoke directly to us through Ms. Tang, making for an enchanting performance. Her pacing was so naturally fluid that the concept of rubato seems unnecessary.

In the moments of silence after the last notes, I felt the entire audience sigh.

After such sublime Chopin, anything else would seem anticlimactic. Ms. Tang solved this by closing with Schubert Impromptu’s.

These mostly well-known concert pieces are quintessential Schubert: lavishly romantic and with sufficient drama to support some entertaining pianistic flair.

Ms. Tang’s flair was to throw in keyboard theatrics. Most notably she pulled the “Lang Lang Whip”, a shamelessly flashy gesture where the pianist whips her left arm down and away from the keyboard. Now I can call it the Lang Tang Whip.

The concert closed with this very short, serene work by Schumann. 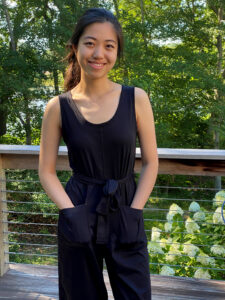 The glue that made this event special was not the venue, the piano or the music. It was Stephanie Tang herself. Friendly and at ease with her audience, she was generous with her time and fun to be around.

This hard-working, multi-faceted pianist has a busy calendar and a bright future.

The piano is a full-sized C&A Steinway D (see What is a Steinway C&A piano). It has glittering silver pins, a translucent upper mid-range and sonorous bottom octaves that excel as pedal notes in e.g. Bach/Liszt Prelude and Fugue in A minor BWV 543.

I share these details because Core Memory Music is a piano-lover’s paradise. Craig recruits excellent young musicians from Yale, Boston and now from the Concert Artists’ Guild. This was the third concert here that Roving Pianist has attended, and it won’t be the last. See https://corememorymusic.com/ for information about upcoming events.