You are here: Home / Concerts / Li, Lipkina, Zimmerman: a Concert of Contrasts 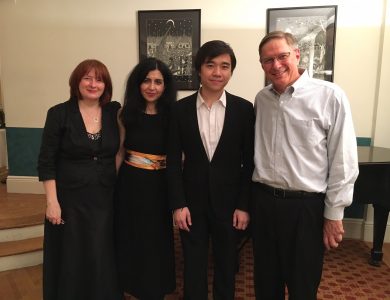 The three musicians at Robin Shoemaker’s Central Park West salon on April 29th were very different, except in one aspect: excellence. Each would have held our attention in solo recital, but thanks to our gracious host we got to experience them all.

Ning-Yuen Li delivered a solid Haydn Sonata in C Major No. 58 Hob. XVI. His powered articulation gave Haydn a warm glow. But Ning’s special contribution to the evening was his gorgeous performance of Chopin’s Ballade No. 2 in F Major Op. 38. During this alternately serene and disturbed work Ning would lean far into the Steinway, as if to polish the keyboard with his distinctive forelock. Some pianists employ such theatrics for drama, but here it arose from Ning’s deep connection with the instrument and a very obvious love of Chopin (check out his F Minor Ballade).

Natasha Lipkina is one of the most accomplished musicians that I have had the pleasure of meeting. She and Ning delivered an enjoyable off-program partnership of violin and piano. This included a Telemann Fantasia and Beethoven’s Violin Sonata No.4 Op. 23. If their collaboration was unscheduled, that was not evident. They played as one from the sheet music, professionals to the core.

When  Margrit Zimmerman joined us, Ms. Lipkina came into her own. Where Ning and Natasha together were at times a dueling duet, Margrit was restrained, slipping from foreground to background as called for. This sacrifice of self to the partnership is what we ask of the collaborative pianist, and it allowed Ms. Lipkina’s viola to shine.

And shine it did! In Schubert’s all too short Litany for All Souls Day (arr. William Primrose), Natasha’s rendition was poignant but clean enough to avoid sentimentality. In his Arpeggione Sonata in A Minor D. 821, she showed her mastery of Viennese drawing-room lyricism. At the same time, she had a Haendel-like precision that made Schubert’s outbursts of dance crisply humorous and delightful. This was a musician at the peak of her art.

When I experience a performance such as that of Ms. Lipkina, I am profoundly stirred. But it would be unfair to single her out because each of these musicians brought their own unique flavor to the evening, such that the whole was greater than the sum of the contrasting parts.