You are here: Home / Concerts / Kissin at Carnegie Hall May 2018

Kissin at Carnegie May 2018

On Sunday May 20th, 2018 we had the great fortune to see Evgeny Kissin perform at Carnegie Hall.

The main course was the great Beethoven Hammerklavier (Sonata no. 29 Op. 106), and for dessert there was a hearty serving of Rachmaninov Preludes.

The Hammerklavier can be a difficult listen. When Yuja Wang played it at Carnegie in 2016, I felt like I had over-eaten. But under Kissin’s hands on this Sunday afternoon in New York, the edgy tapestry of disparate voices came together as a thing of great beauty.

There was none of the overblown rubato that I have called Kissin out for in the past. Nor was this performance at all ascetic. Everything about his Hammerklavier was in perfect balance, leaving the audience in awe. I felt that we were in the presence of greatness.

The program contained some 10 Rachmaninov preludes. You can’t go wrong with Kissin and Rachmaninov, in my opinion. Among my favorites was Opus 23 no 2 in B flat major. As to Opus 32 no. 10 in B minor, I felt that his tempo was so slow as to be risky, but it worked. 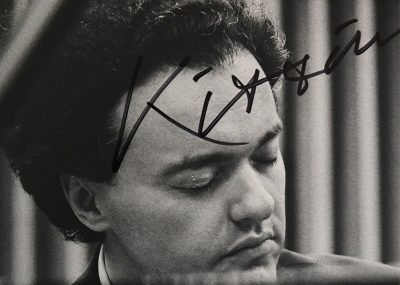 Kissin signed his CD for me

I like that Kissin announces his encores. Without this I would have not known the Scriabin or his own original composition. Rachmaninov’s C sharp minor prelude, however, needed no introduction. Here Kissin’s excellent YouTube recording.

I missed the last two encores because I stepped out early to get in line for the artist’s post-recital CD signing. There were far too many people in line for selfies, which was just as well after the marathon performance by Mr. Kissin. I was happy just to have my little piece of greatness to take home.